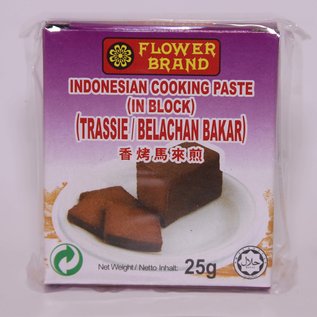 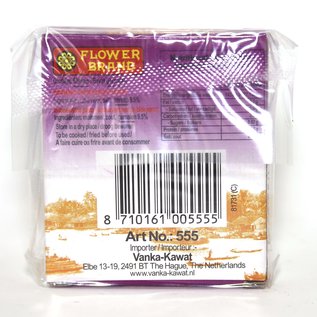 Trassi is a bit like FOODbazar's big bang. Without trassi no nasi goreng like nasi goreng is intended. But somehow the category managers of the supers have something against trassi and so the stuff slowly but surely disappeared from the scene. Apparently they prefer to sell those bags with some kind of thin liquid mud in it.

Trassi is not tasty either, it derives its scent from shrimps that after a rotting process have turned into a black mass that smells strongly. After some research we found two types. one of which can stand the test of criticism. There is a smell on the other, in a figurative sense.

The shrimp paste that can withstand the test of criticism is that of Flower Brand. The percentage of shrimp is just under 10%, but maybe that's a good thing. It also consists of corn flour and salt, which is nice and clear. Of course we keep our eyes open for other species.

The other shrimp paste seemed a lot more attractive, because it was freshly prepared and in a handy pit. But no shrimp has had to die for this and that is a shame for a product that consists of shrimp. Well, the mere term "freshly prepared" for a putrefactive product should have prepared us for a bit of disenchantment towards ourselves. The content of this jar from Faja Lobi simply consists of water, sugar, salt, herbs, spices and preservative (unfortunately without a name or E-number).