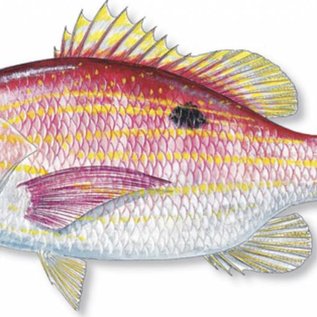 The lane snapper ( Lutjanus synagris ) is common in large parts of the Atlantic. However, he prefers coral reefs and places with a lot of vegetation and a sandy bottom.

Like the red snapper he makes in groups above coral reefs mainly on squid, molluscs and crustaceans. The taste of the lane snapper is very similar to that of the sea bass. The fish meat is a bit like the redfish, but is much firmer in terms of structure.

The supply of the lane snapper is much less erratic than the red snapper. This has made it possible that this species is easier to catch than the other snapper species because it is more aggressive and less alert or gear. The animals are caught with line and hook.

Before you order please contact us to avoid disappointment, because it remains a wild fish and so there is a chance that there is sometimes very little supply or that only very large or small fish are landed.

Do not forget to order a coolpack immediately.