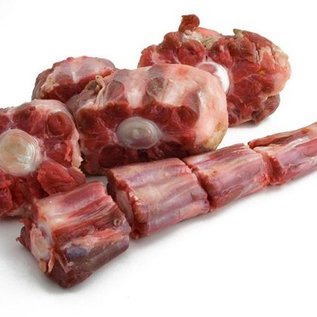 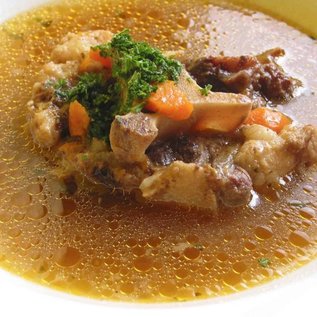 €1,94
Lined grass is a bit of an odd name, since these cattle graze for most of the year without any outside assistance for their food together. If the fields are too wet and boggy they have made, but then they get in the form of grass hay and silage (fermented) grass.

In short, just as was previously the practice. Inadvertently, because if they did then simply, it also led to meat with a better taste and a better structure. A cow is not an animal that has been set on the food corn and soy. Its complicated digestive tract is optimally arranged on the digestion of grass. Cattle which predominantly (carbohydrate) grain food, develop a different kind of fat that is also not in the muscle tissue, but around it. Finally, meat from cattle little moving parts lighter. This is also true for pigs.

Oxtail is a somewhat misleading name, because most tribes tails of cows and not from steers (gacastreerde bulls). Although most people know the tail of the famous oxtail soup (with or madeira) he does well in other preparations.