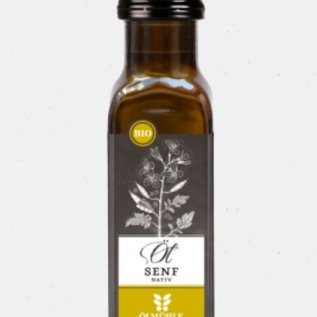 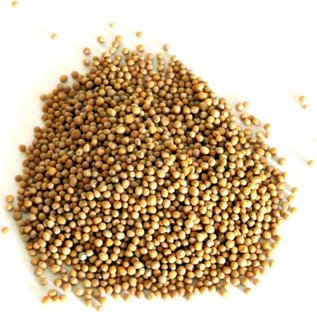 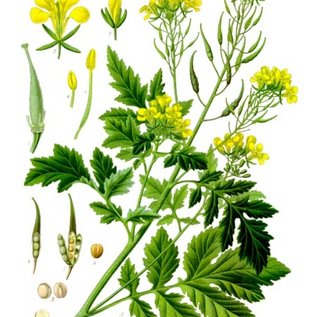 Mustard oil is a bit of a confusing name, it can refer to an oil pressed from mustard seed, but it can also refer to an essential oil with a high content of mustard glucosides. These glucosides are released during production, are mixed with water and the glucose spikes are extracted by distillation. Finally, it may concern a product that is made from mustard seed extract via infusion in another vegetable oil.
The oil is based on seeds of black mustard (Brassica nigra), white mustard (Sinapis alba) or sarepta mustard, also known as brown Indian mustard (Brassica juncea).

Ölmühle Solling mustard oil belongs to the first category, that is to say pure cold-pressed from yellow mustard seed (Sinapis alba) with an extremely low erucic acid content.
Erucic acid is a monounsaturated fatty acid (C22: 1), which is found in mustard seed. The rules on the maximum level of erucic acid in foodstuffs (dated 24 May 1977 - Bundesgesetzblatt I 1977, p 782) must not contain more than 5% erucic acid edible oils, fats and their mixtures intended for the consumer.

The health effects of erucic acid (by far the most important constituent of mustard oil) are controversial. Erucic acid could eventually lead to heart fatigue. This is based on studies in rats, but no negative effects have ever been documented in humans [2]
Mustard oil was once considered unfit for human consumption in the United States, Canada and the European Union due to its high erucic acid content. This has happened because of poorly designed research in rats. Rats are less able to digest vegetable fats than humans and pigs. All in all, it led to the conclusion that erucic acid and mustard oil are very toxic to humans. That conclusion is now outdated.

Mustard contains the same essential oils that are also responsible for the pungent taste of horseradish, wasabi, arugula, radish, garden cress and watercress. Dry mustard seed is odorless and tasteless in three states, the characteristic taste and sharpness is only released when water and / or acid are added.
Ölmühle Solling buys organic yellow mustard seed from seed of the Martigena variety. This variety has the characteristic that the content of erucic acid is only 1%.

Mustard oil adds a spicy twist to dishes. Here it is somewhat less common, but in Asian kitchens it is frequently used. It is also widely used in Italy, although there is often a preference for the extract, which is very strong and is applied drop by drop. A less obvious application is the use of the oil for jam, which gives it more depth.
In Northern Italy (Po Valley) the Mostarda di Cremona is popular, fruit pickled with sugar to which mustard extract has been added.

Add your review
0 stars based on 0 reviews
culinaire olie (27) / mosterd (1) / mosterdolie (1) / olie (6)
Please accept cookies to help us improve this website Is this OK? Yes No More on cookies »