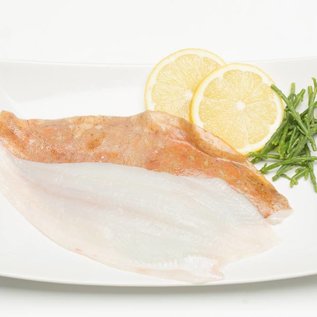 The lemon sole (Microstomus kitt) or nose tongue belongs to the plaice family and occurs in the northeast Atlantic.

A lemon sole can be up to 65 inches long and nearly 3 kg heavy. The highest recorded age 23 years. The body of the fish has a stocky shape.

The lemon sole is a saltwater fish found in temperate climates. The species is found mainly in the seas and waters on a hard surface. The depth at which the species is 10 to 200 meters.

The diet of the fish consists mainly of invertebrates, in which a preference exists for polychaetes.

In summer and autumn is the tastiest lemon sole deer, he is not the pairs and so nice and thick. Anyhow landings in spawning is minimal as there is hardly any fishing for char device

Remarkably, the fish sometimes wiordt covered by a very slimy layer. This layer must be removed when the fish are not processed immediately. In cooling, the mucus will affect the fish so that it can be smelly.

Culinary, it is a very attractive fish, with thick, firm flesh that best prepared as plaice.