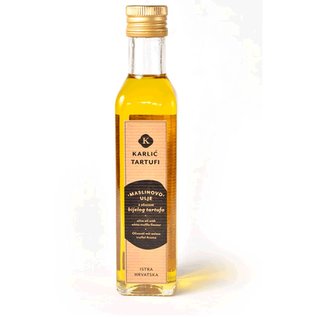 A great addition to white meats, fish, and all types of salads, or you can pour it over truffle or other cheeses.

The truffle farm of the Karlić family from Paladini near Buzet (Istria, Croatia) was established in the last century, to be precise, in 1966. The forest of Matovun was much larger then than today. The white and black truffles found there were among the best in all of Istria. However, the richest site is currently located at the bottom of Lake Butoniga.

Radmila Karlić went truffle hunting with her father Ivan from the age of ten. This passion remained and from 1994, she followed in her footsteps through the company GIR, together with her husband Goran and later the children. In doing so, she built on the efforts of both her father Ivan and her mother Danica and uncle Lucijano.

With the help of twelve dogs, five of which are still in training, truffles are searched daily. We work without a fixed program, but it is important that both the dogs and their supervisors stay in daily training.

The family's many years of experience in truffle hunting have passed from generation to generation, resulting in the founding of GIT doo (Goran and Radmila) in 1994. The company focuses with great dedication on truffle hunting, truffle purchasing and sale of truffles both fresh and frozen. In addition, truffles are processed and products are developed that find their way to both domestic and foreign markets.

Add your review
0 stars based on 0 reviews
culinaire olie (27)
Please accept cookies to help us improve this website Is this OK? Yes No More on cookies »