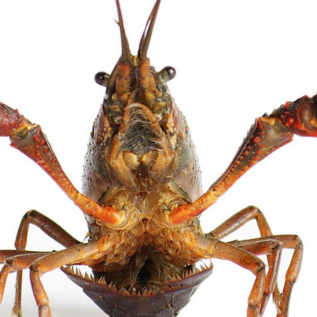 The Procambarus clarkii is a so-called invasive exotic. Originally the animal occurs in the US and Mexico and is eaten a lot there. This is a bit less common here, which is a shame, because the animal has become a local pest due to a lack of natural enemies. One of the problems is that the animal digs tunnels in dikes and ditch banks. The latter causes cows to break their legs. another problem is that they eat a lot of fish and other native aquatic animals, which puts pressure on biodiversity.

For a long time, legislation posed a problem in combating by capturing. Inland fishermen were not allowed to fish specifically for the animals because there was no legislation explicitly stating that fishing is allowed. Therefore they could not be sold.

Crayfish fishing has now been legalized and we can simply sell them. And you understand that if you eat a crayfish, you make a positive contribution to things like biodiversity, cow welfare and dike surveillance. As an added bonus, the slightly sweet lobster meat is also unusually tasty.

There is supply all year round, but there is less supply in September and October.

We advise you to order a cool pack with your order. That costs € 10, but then you can be sure that the animals survive the journey and because they are anesthetized by the low temperature, they do not suffer from transport and they remain optimally fresh. In addition, you are left with a super-insulating bag that you simply put in the car (takes up little space) so that nothing stands in the way of an impulse purchase of the order of size frozen pizza / ice cream cake. The less impulsive and perfectionist have armed the insulating bag with the four gel packs supplied. Of course frozen in plenty of time.

For the 'faint at heart', we have also pre-cooked, pre-packaged etc ...